One of the Main Arteries of the Forearm

The ulnar artery is the last branch, or the terminal branch, of the brachial artery. It transports oxygenated blood to each of the muscles in the forearm and the hand. The ulnar artery starts at the proximal forearm, crosses in front of the elbow, and travels down to the medial forearm on the side of the pinky finger where it ends. The wide diameter and location of the ulnar artery both make it a suitable choice for the placement of hemodialysis fistulas.﻿﻿

The larger brachial artery located in the upper arm breaks into two branches which travel down through the forearm. These two branches are the ulnar artery and the radial artery.

When found in the hand, the ulnar artery forms other structures, including:

These smaller branches form structures within the hand. Some structures within the hand which receive blood supply from the ulnar artery are the arches and grooves of the palm, along with muscles which flex and rotate the hand and fingers. In utero, both the ulnar and radial arteries originate from the axial artery, rather than the brachial artery, which is underdeveloped at that time.

Both the radial and ulnar arteries lie superficially on the forearm, meaning they are simply covered by skin. As such, these structures tend to be visible by the naked eye, especially in individuals with thin skin or larger arteries.

There are anatomical variations of the ulnar artery that are sometimes found in certain individuals.

Anatomical variations in these individuals may be the result of remaining embryological arteries or slight underdevelopment of arterial structures in the forearm.

Again, some diagnostic tests may mistake a more superficial ulnar artery for extraneous structures, venous inflammation, or other inflammatory conditions. This makes identification and awareness of anatomical structures and potential variations important to diagnosis and appropriate treatment.﻿﻿

Ulnar artery joined with radial artery: In very rare instances, and in cases where both arteries are more superficial than usual, the ulnar artery may be joined with the radial artery. This leads to an abnormal branching pattern in the forearm, causing additional difficulty with interpreting imaging results, completing diagnostic tests, and mistakenly identifying impaired arterial structures in the forearm.﻿﻿

The ulnar artery serves the main function of transporting oxygenated blood to the muscles of the forearm and the hand. The ulnar artery should not be confused with the ulnar vein or the ulnar nerve, all of which have differing functions.

Besides feeding the forearm muscles, the ulnar artery also provides oxygenated blood to the smaller arteries within the hand and forearm. These smaller arteries include the digital arteries, which provide blood to each individual finger and the thumb.

The ulnar artery is used as a source to record a pulse. A normal reading of the ulnar pulse is typically between 60 and 100 beats per minute (bpm).

This can be used as a simple way to record vital signs, monitor basic heart functioning, and check for cursory irregularities in the cardiovascular system. The ulnar pulse can be taken by using the index and middle fingers to feel the artery and count the number of pulses present.

Due to its location amidst other structures within the forearm, it may sometimes be difficult to locate and record the ulnar pulse. However, this can be made easier by having the individual relax their arm, particularly at the wrist, to prevent tense muscles from obstructing the presence of the pulse.

Irregularities noted in pulse at the level of the ulnar artery should be further investigated through more thorough diagnostic evaluations.﻿﻿

Hypothenar is a term used to describe the ulnar region of the hand between the pinky finger and the ulnar side of the wrist. Ischemia refers to the lack of blood supply to a certain area. This gives a clear picture of what someone with ulnar artery thrombosis may experience. Symptoms include chronic pain and changes in blood supply to any or all of the fingers and palmar surface.﻿﻿

This trauma may be due to repetitive overuse if someone continually repeats the same motion during a task at work, school, or within the home.﻿﻿ It can also be the result of an acute injury to the hand.

As the onset of ulnar artery thrombosis may be sudden or gradual, this condition may be mistaken for cubital tunnel syndrome, Raynaud’s disease, wrist fracture, and peripheral vascular disease.﻿﻿ Accurate diagnosis is crucial to gaining a full picture and beginning the appropriate treatment for this condition.

Ulnar artery thrombosis can be treated through medications such as vasodilators or calcium channel blockers.﻿﻿ Biofeedback along with ganglion blocks can also assist as conservative methods for treating this condition. Surgery may be indicated in severe cases where pharmaceutical intervention fails.﻿﻿ 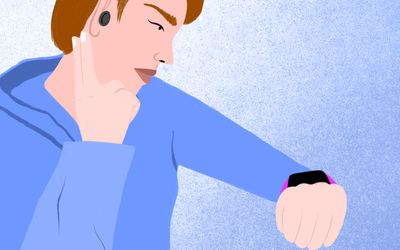 How to Check Your Heart Rate 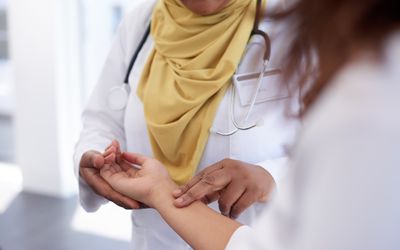 Anatomy of the Radial Artery 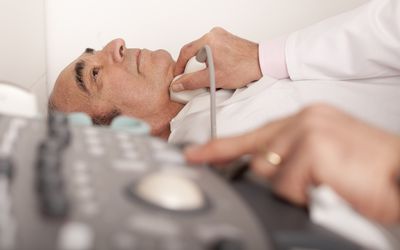 The Anatomy of the Transverse Cervical Artery 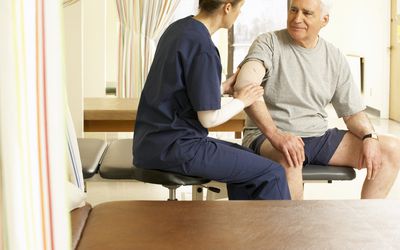 The Anatomy of the Ulnar Nerve