The thymus has been a mysterious gland throughout much of history. It was known to exist as early as the first century A.D., but its role would not begin to be understood until much later. The ancient Greeks thought it was “the seat of courage.” During the Renaissance, they decided it had no function. It was not until the 1970s that its role in the immune system started to unfold.

Today we know the thymus as an immune system organ. Within the immune system, different white blood cells have different jobs. T-lymphocytes, or T-cells, are one type of white blood cell. In humans, the thymus is an organ you can think as a ‘boot camp’ for baby T-lymphocytes. It is a place for growth, development, training, and selection of T-lymphocytes, the white-blood-cell immune soldiers, so that they can mature to go out and fight infections and foreign invaders.

The ‘T’ in T-cells actually stands for thymus, whereas the ‘B’ in B-cells refers to the bone marrow. All of your white blood cells are made in the bone marrow; only a special subset of these blood-forming cells migrates from bone marrow to thymus, where they ‘train’ to become T-lymphocytes.

Incidentally, human beings aren’t the only creatures to have a thymus—in fact, the thymi of calves and sometimes lamb are among the organs prepared in a dish called sweetbreads, once popular in Britain.

Location and Size of the Thymus

The thymus is a gland in the upper chest/lower neck area. The thymus tends to be confused with the thyroid—a gland that’s in the same general vicinity, but has a very different function. The thymus is a soft, pinkish-gray gland located behind your breastbone and between your lungs. Doctors call this area of the chest the mediastinum, and it is jam-packed with important structures.

In human beings, the thymus is not an organ that is generally visible or detectable from the outside. That is, a shadow from the thymus can sometimes be seen on x-rays; however, lumps or bulges in the neck region are much more likely to be due to other things, such as swollen lymph nodes or cysts. Very rarely, a part of the thymus is further up in the neck than it should be—something called ectopic cervical thymus.

Depending on your age, chances are that you do have at least the remnants of a thymus, but in most cases, adults don’t really have an active thymus. After puberty, the thymus starts to slowly shrink, or atrophy, and it becomes replaced by fat. Not to worry, however, since it is generally accepted that the thymus produces all the T-cells you will ever need prior to this point. Although activity of the thymus seems to grind to a halt in adulthood with rare exceptions, T-lymphocytes continue to be generated in your body and are replenished throughout your lifetime.

Individuals can vary greatly in the size and shape of their thymus. The thymus is relatively large when we are infants, weighing about 25 grams at birth. Reaching a maximal weight between 12 and 19 years, about 35 grams on average, the thymus gradually shrinks over years, from ages 20 to 60, with the replacement of thymus tissue with fat tissue. The average is about 15 grams by the time you are 60 years old.

The Thymus Is a ‘Career Counselor’ for Baby White Blood Cells

Blood cells—both red and white blood cells—arise from stem cells that reside in or originate in the bone marrow. During a child’s development, progenitor cells from the bone marrow migrate into the thymus, where thymus cells provide the right environment, with cell receptors and chemical signals, to rear them properly.

When the T-cell progenitors move from the bone marrow into the thymus, they are called thymocytes, and signals and hormones from the thymus, including thymopoietin and thymosin, guide the development of thymocytes into adult T-cells.

The thymus makes sure these thymocytes grow up to have the right ‘equipment’ or markers on the outside of the cell. There is also a process of selection and weeding out. For instance, at one of the several checkpoints, about 95% of thymocytes are weeded out—only about 3 to 5 percent of the thymocytes survive. The survivors differentiate into specialized (CD8+ or CD4+) lymphocytes and spend about 10 days in a certain part of the thymus, where they learn to tell the difference between ‘self’ markers and foreign invaders’ markers. After this intricate process, the T-cells can leave the thymus and do their various jobs in the immune system.

Enlargement can be in reaction to something, or it can be the result of a disease process. Sometimes during periods of stress or after treatment with certain medications such as chemotherapy and steroids, the thymus may enlarge. The thymus can also be enlarged in a process known as lymphoid hyperplasia, or autoimmune thymitis, which may be associated with diseases such as myasthenia gravis, systemic lupus erythematosus, rheumatoid arthritis, scleroderma, and Graves disease. Some of these disorders may be associated with swollen lymph nodes as well.

When doctors evaluate the thymus in imaging, they try to distinguish whether the pattern is that of overall thymus enlargement versus that of malignancy, which tends to begin more like focal areas of growth or enlarging masses. Overall, tumors of the thymus are rare. Estimates are that only about 1.5 cases occur for every million people each year in the US, or about 400 cases per year.

Thymoma vs. Thymic Carcinoma: A thymoma is a tumor in which the tumor cells look similar to the normal cells of the thymus. Thymomas grow slowly and rarely spread beyond the thymus. In contrast, tumor cells in a thymic carcinoma look very different from healthy thymic cells, have rapid growth, and have usually spread to other locations when the cancer is found. Thymic carcinoma is more difficult to treat than thymoma.

Myasthenia Gravis: Myasthenia gravis is an autoimmune disease associated with muscle weakness in the voluntary or skeletal muscles of the body. About 30 percent to 65 percent of people with thymomas also have myasthenia gravis, and this is far and away the most common autoimmune disease associated with thymomas. In myasthenia gravis, the body mistakenly makes antibodies to receptors on the muscle cell surface, blocking the chemical signals that cause muscles to move, resulting in severe muscle weakness. 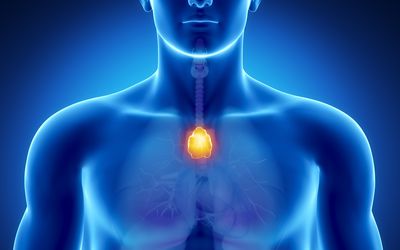 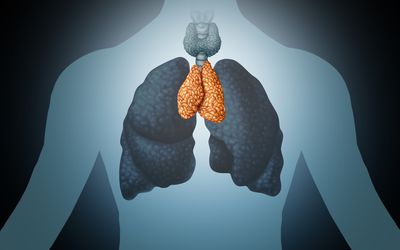 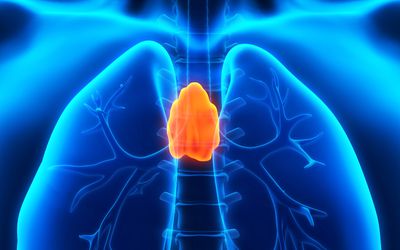 The Anatomy of the Thymus 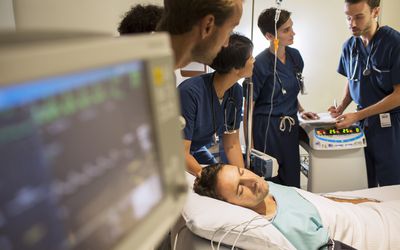 How Myasthenia Gravis Is Treated