A Creepy Little Parasite Might Help You Tolerate Gluten Again

It sounds really gross: swallowing an intestinal parasite on purpose in an effort to treat your celiac disease. But researchers in Australia actually are having some luck using the human hookworm to figure out how to help celiacs tolerate gluten again.

It's not quite what you're thinking, though. Yes, the research may be showing some promise (although it remains extremely experimental and unproven), but it's pretty unlikely your physician will ultimately prescribe a vial of hookworm larvae to treat your condition.

Instead, the researchers hope to learn exactly what it is about the admittedly yucky-sounding hookworm that may trigger positive changes in your small intestine, and then turn that knowledge into a non-yucky drug.

"The ultimate goal is to classify what specific hookworm-derived factors can mimic these biological effects in celiac patients, which could be produced as a pill-based medication to enhance gluten tolerance," says Paul Giacomin, Ph.D., a research fellow at James Cook University in Australia, where the studies are taking place.

Beware: this is not for the squeamish. Hookworms—which measure up to half an inch long and have gaping mouths fit for horror movies—latch onto the lining of your intestinal tract and drink your blood. They live for several years or even longer.

You can catch them when you walk barefoot on soil that contains feces from someone with an existing hookworm infection, since hookworm larvae can penetrate human skin and make their way to your digestive tract.

Hookworms used to be a common problem in the United States, and they still infect more than half a billion people worldwide, mainly in places that have lax sanitary standards. Most people who have hookworms don't show any symptoms, but hookworms potentially can cause digestive issues. More serious infestations cause anemia from blood loss.

At this point, you're probably thinking, "Good riddance!" to hookworms, which no longer are common in the U.S. and other industrialized countries. But is there an upside to hookworms?

As it turns out, there may be.

Some scientists believe the huge increases in numbers of people with conditions such as celiac disease and allergies could be the result of our entire society being too clean. This theory, known as the "hygiene hypothesis," speculates that our efforts to eliminate parasites and diseases and to protect ourselves from as many "germs" as possible have actually led our immune systems astray to the point where they've started attacking our own cells by mistake.

The clinicians exploring the use of hookworms in celiac disease believe that by introducing hookworms into the digestive system of someone who has celiac, it may be possible to "reset" the immune system so that gluten doesn't cause a reaction and intestinal damage.

The research team at James Cook University has performed several studies so far that involve implanting hookworms into people with celiac disease, with varying results.

In one study, reported in PLoS One, 10 celiac volunteers were intentionally infected with hookworms, and then consumed wheat for five days. Five of the 10 experienced temporary—but painful—intestinal inflammation as a result of their hookworm infections. However, the hookworms didn't seem to help control the volunteers' immune response when they then ate gluten, since test results indicated worsening gluten-related damage.﻿﻿

Results in another hookworm study were mixed, as well. In that study, published in the International Journal for Parasitology, the group found more volunteers with celiac disease who agreed to be infected with the hookworms. The hookworms did appear to reduce some inflammation, but didn't prevent villous atrophy, the damage to the small intestine that occurs in celiac disease.﻿﻿

In a third study, reported in the Journal of Allergy and Clinical Immunology, the researchers infected 12 adults with 20 hookworm larvae each and then fed them increasing amounts of gluten, culminating in three grams daily (in the form of 60 to 75 strands of spaghetti). In that study, the hookworms seemed to promote gluten tolerance. Those with the hookworms who consumed the gluten experienced improved symptoms and medical test results.﻿﻿

The most recent study, published in Scientific Reports, looked at the various species of bacteria that typically live in our intestines, and looked at how the introduction of hookworms affected those species in people with celiac disease. It found hookworm infection seems to help people with celiac disease maintain many different bacterial species in their intestines, even in the face of a gluten challenge.﻿﻿

That bacterial diversity, the researchers say, may be the key to using hookworms—or knowledge derived from hookworm studies—in the treatment of celiac disease. This concept may even have broader implications: another research team investigated intestinal parasites in multiple sclerosis, another autoimmune disease, with promising results.

The use of hookworms to treat celiac disease is not a mainstream idea, and the researchers haven't yet shown that hookworms can help prevent or lessen damage when someone with celiac disease consumes gluten.

Ultimately, he says, he doesn't expect to infect every person with celiac disease with their very own colony of hookworms. Instead, his team wants to determine what it is about the little hookworms—and their interactions with our immune systems—that may lead to improved gluten tolerance in celiacs, and use that information to create better treatments for the condition.

Until then, however, the most effective treatment for celiac disease continues to be the gluten-free diet. 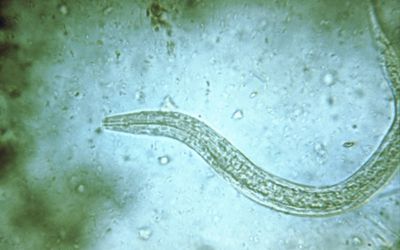