T cells are a subset of white blood cells that play an important role in the body's immune system. CD4 is, by contrast, a type of protein found on certain immune cells like T-cells, macrophages, and monocytes.

CD4 T cells are considered "helper" cells because they do not neutralize infections but rather trigger the body's response to infections. In response, CD8 T cells—classified as such because of the type of protein on their surface—play the part of "killer" cells by producing substances (antibodies) that help fight off viruses and other foreign invaders.

One of the conundrums of human immunodeficiency virus (HIV) infection is that the very cells meant to initiate an immune defense are the same ones targeted for infection by the virus. As a retrovirus, HIV needs to infect certain host cells (living cells in which a virus multiples) in order to make copies of itself. CD4 cells are the prime targets for this function in the course of an infection.

During infection, HIV attaches to these helper cells, emptying its genetic material within so that the host's genetic coding can be altered to produce other HIV virions (complete virus particles). In doing so, the host CD4 cell is killed. The infected person's ability to trigger an immune defense is gradually depleted to such a point as to leave their body open to opportunistic infections.

The dynamics of HIV are such that killer CD8 T cells eventually become unable to cope with an advanced infection and a growing population of HIV (as measured by the viral load, the amount of virus that can be detected in someone with the infection).

If an HIV infection is left untreated, the immune system will, in all but rare cases, completely collapse (or become compromised).

More often than not we tend to think of CD4 T cells as one type of cell. In fact, it was only in the mid-1980s that scientists began identifying various subsets, each with different functions.

Some are important in activating special immune system cells called macrophage and dendritic cells during initial infection, while others direct immune defenses when faced individually with parasitic organisms, bacteria, or viruses.

In a healthy adult, a normal CD4 count can vary enormously (by population, age group, etc.) but is typically around 500 to 1,500 cells per cubic millimeter of blood (mL). When it falls below 200, however, then the disease is technically classified as AIDS (acquired immune deficiency syndrome).

It is during this time that the most serious opportunistic infections are known to occur as the immune system is effectively compromised by infection.

Prior to 2016, CD4 counts had been used as a means by which to determine when to start antiretroviral therapy. But in recent years, that role has been changed as global authorities now endorse the immediate initiation of HIV therapy on diagnosis (rather than waiting until the CD4 count dropped below 500 cells/mL, as was the previous guideline).

The CD4 count is also used to monitor an individual's response to therapy. Starting antiretroviral therapy early generally is able to restore a person's immune function.

By contrast, people starting therapy at very low CD4 counts (under 100 cells/mL) often have a more difficult time reconstituting their CD4 counts to normal levels, particularly after a severe bout of illness.

It is, therefore, important to get tested and seek immediate care in the event of an HIV-positive diagnosis. If treatment is started promptly, people living with HIV now have a far better chance of living normal and healthy life spans. 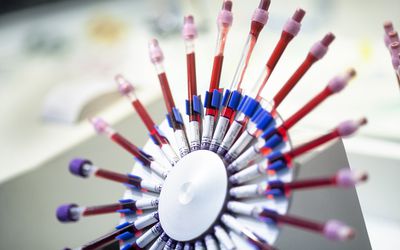