5 Reasons Why You Should Get Screened Today

It can be difficult to motivate people to get tested for sexually transmitted infections (STIs, also referred to as sexually transmitted diseases, or STDs). In some cases, people are scared to get tested because of how it may affect their relationship. Others are terrified of being diagnosed with human immunodeficiency virus (HIV) or other incurable STIs. Still others assume that they are "clean" because they have no symptoms.

All of these responses, while understandable, place you at greater harm than you might think. By avoiding recommended STI tests, you could find yourself dealing with serious complications or placing others' health at risk.

Here are just some of the short- and long-term consequences of avoiding STI testing.

Clearly, having an untreated STI increases your risk of passing the infection to others. Even if you use condoms and practice safer sex, the risk of transmission remains significant. This is especially true with STIs like human papillomavirus (HPV) for which condoms only provide partial protection.

Even if an STI cannot be cured—as is the case with HPV, HIV, genital herpes, and hepatitis B—knowing your status can get you the treatment you need and the information necessary to prevent you from passing the infection on to others.

For example, taking antiretroviral drugs not only prevents HIV from causing long-term harm, but it reduces the risk of transmission to zero if the virus is fully suppressed, according to the landmark PARTNER1 and PARTNER2 studies.

If left untreated, curable STIs like chlamydia and gonorrhea can lead to pelvic inflammatory disease (PID) in women and infertility in both women and men. Complications of syphilis can also cause the obstruction of the epididymis, increasing the risk of male infertility.

To preserve your chances of pregnancy, it is important to get tested for STIs if you are in a relationship or plan to have a family one day.

The U.S. Preventive Services Task Force (USPSTF) currently recommends the screening for chlamydia and gonorrhea in all sexually active women age 24 and younger, as well as older women at an increased risk of infection.

The USPSTF further endorses screening for syphilis in all adolescents and adults at increased risk of infection, as well as all pregnant women.

How Long Should I Wait to Get an STD Test?

There are numerous STIs that pose a risk not only to a pregnancy but to an unborn baby as well. Not only might an infection prevent you from carrying to term, but it can also transmit the infection to your baby, either before or during birth.

Pregnant women with untreated chlamydia, for example, are at a greater risk of miscarriage, premature birth, and stillbirth. Gonorrhea can be passed from mother to child during vaginal delivery, causing a potentially severe eye infection. Syphilis and herpes can be potentially fatal in a newborn.

By knowing your STI status, you can reduce harm to both yourself and your baby.

This is especially true with HIV, in which the use of antiretroviral drugs has reduced the risk of transmission to 1 out of every 100,000 births in the United States, according to the Centers for Disease Control and Prevention (CDC).

Getting or Passing HIV

But it is not only ulcerative STIs that pose a risk. Every STI can trigger an inflammatory response in the genitals. When this occurs, immune cells will flood the tissues to fight the infection.

In the case of CD4 T cells in HIV, the body's own immune response, which should be fighting the infection, actually may make it easier for the infection to prosper.

Only by getting tested and starting HIV therapy can you suppress the virus and prevent transmission. If you don't have HIV, getting treatment for any other STIs that you have reduces your risk of getting an HIV infection.

The CDC recommends testing of all Americans ages 13–64 at least once as part of a routine doctor's visit. For gay, bisexual, and men who have sex with men, at a minimum CDC recommends annual screening.

If left untreated, STIs can cause severe health problems. Over time, severe and sometimes life-altering complications can develop. Some of these may progress undetected over the course of years, often without any outward signs.

Early diagnosis of STIs will help you get treatment before complications occur or other people become infected.

If entering into a new relationship, consider suggesting that you and your partner get tested at the same time. This way, you can both make informed choices.

If you are in a long-standing relationship and think you have an STI, you may be forced to reveal how you got infected if the test comes back positive. It may have nothing to do with infidelity, but the conversation can be difficult nonetheless.

Getting tested at least lets you know where you stand. Not knowing can hurt those around you, including people you care about most.

STD Testing: What to Expect
10 Sources
Verywell Health uses only high-quality sources, including peer-reviewed studies, to support the facts within our articles. Read our editorial process to learn more about how we fact-check and keep our content accurate, reliable, and trustworthy. 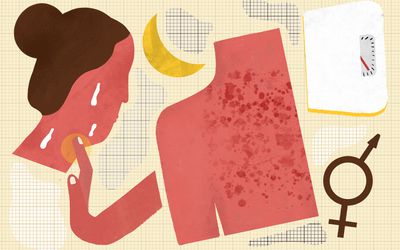 Genital Pimples vs. Herpes: What Are the Differences?