Adenopathy and lymphadenopathy are medical terms for enlarged or swollen lymph nodes, bean-shaped structures throughout the body that are part of the immune system. Infection is the most common cause of adenopathy, but autoimmune disorders and cancer can also make the lymph nodes swell.

Cancer that starts in the lymph nodes or has spread (metastasized) there from other parts of the body can cause adenopathy.

This article will go over adenopathy in cancer, including why the lymph nodes can swell in cancer and how adenopathy can affect cancer diagnosis and treatment.

What Are Lymph Nodes?

Lymph nodes are small, bean-shaped organs that produce and store blood cells (called lymphocytes) that help fight infection and disease. There are roughly 600 of these nodes throughout the body. Their primary role is to filter waste from the lymphatic fluid. As they do so, the lymphocytes work to neutralize any foreign substance they encounter.

While some lymph nodes are located superficially—in the groin, armpit, and neck, for example—others are situated deeper in the body, such as in the chest or abdomen.

More commonly, cancer adenopathy will occur when a malignancy in one part of the body (known as the primary tumor) spreads to other parts of the body to create new (secondary) tumors. The lymph nodes are the organs most commonly affected by this.

Not all adenopathies are the same. For example, cancerous nodes tend to be hard, painless, and firmly affixed to surrounding tissue. By contrast, benign or noncancerous lymph nodes are usually painful to the touch and will decrease in size and density as the infection resolves.

That said, you cannot diagnose the cause of adenopathy by physical characteristics alone. In some cases, a cancerous node may press on a nearby nerve and cause pain. In others, a benign node may be hard and relatively painless (such as those that can happen with persistent generalized lymphadenopathy seen in HIV).

How Cancer Spreads Through the Lymph Nodes

When a tumor metastasizes, cancer cells break away from the primary tumor and spread to other parts of the body through either the circulatory (blood) system or the lymphatic system.

When the cells are in the blood, they are swept along in the blood flow until they get stuck somewhere, usually a capillary. From this point, the cell can slip through the capillary wall and create a new tumor wherever it landed.

A similar thing happens with the lymphatic system. In this case, cancer cells break off and are carried to the lymph nodes, where they get stuck. While the nodes will respond with an aggressive immune attack, some cancer cells will survive to form a new tumor.

But here is where the difference lies: Unlike the circulatory system, which can carry cancer cells to almost any part of the body, the distribution of cancer through the lymphatic system is more constrained. The nodes nearest the tumor will typically be the first affected. From there, additional cells can break off and move to distant nodes in other parts of the body.

Because of how lymph nodes are affected, healthcare providers will routinely check them to see if cancer has started to spread and, if so, by how much.

The enlargement of superficial lymph nodes can often be detected through a physical examination. Imaging tests such as computed tomography (CT) scans can also be used, particularly for lymph nodes in the chest or abdomen.

Additionally, the healthcare provider may order a lymph node biopsy. The biopsy involves the removal of lymph node tissue for examination under a microscope. It would be used to see if cancer has spread from a primary tumor or in cases where lymphoma is suspected.

The biopsy can either be performed by surgically removing a node or, less commonly, by removing cells using a less invasive procedure called fine needle aspiration. The biopsy results are important for both the diagnosis and staging of cancer.

Adenopathy on its own does not alter the course of cancer treatment. However, having cancer cells in your lymph nodes can affect treatment insofar as it will inform the stage of your disease.

The recommended course of treatment will largely be based on the staging. The staging will also provide the diagnosis ICD-10 code, which your health insurer will use to approve treatment.

Adenopathy, or swollen lymph nodes, can be caused by a variety of things, including cancer. When secondary tumors form or when metastasis occurs, the lymph nodes can be affected, and swell. A lymph node biopsy may be done to see if there is cancer in the lymph nodes. This also impacts the stage of the cancer diagnosed.

7 Sources
Verywell Health uses only high-quality sources, including peer-reviewed studies, to support the facts within our articles. Read our editorial process to learn more about how we fact-check and keep our content accurate, reliable, and trustworthy.
Additional Reading
Originally written by Lisa Fayed
See Our Editorial Process
Meet Our Medical Expert Board
Share Feedback
Was this page helpful?
Thanks for your feedback!
What is your feedback?
Related Articles 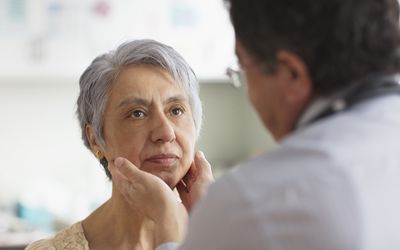