Lymphocytes are an important part of the immune system, serving as the body’s first-line defense against disease-causing pathogens such as bacteria, viruses, and parasites.

Lymphopenia is most often caused by infections, such as influenza or COVID-19. It typically resolves on its own once the infection has cleared. Sometimes lymphopenia is caused by an unknown origin, which may suggest a more serious underlying condition.

This article explains lymphopenia, its causes, and related conditions.

The vast majority of cells in our blood are erythrocytes (red blood cells) which are responsible for transporting oxygen throughout the body. This is followed by thrombocytes (platelets) and leukocytes.

Leukocytes are produced in the bone marrow and circulate freely in the bloodstream as part of the immune system. Lymphocytes represent the largest proportion of these cells, ranging anywhere from 20% and 40%.

Lymphocytes can be further broken down into three subsets:

Lymphopenia may be identified by the type of lymphocyte affected. For example, HIV specifically targets CD4 T cells for infection, resulting in massive losses of that specific cell.﻿﻿﻿ The loss of B cells is more associated with immune-suppressive drugs (such as those used for organ recipients) while NK depletion is typically a rare situation.﻿﻿

Lymphopenia can be caused by many conditions, including infection and medication side effects. At times, the condition may only affect lymphocytes. In others, it can be the result of a depletion of all white blood cells.﻿﻿﻿

For instance, when the treatment for viral hepatitis includes peginterferon and ribavirin, it can cause suppression of just neutrophils (neutropenia) or just lymphocyte (lymphopenia) in some people. In others, it can affect the entire range of white blood cells (leukopenia).

Lymphopenia is most associated with conditions that affect the bone marrow, including:﻿﻿﻿

The diseases and conditions most commonly associated with lymphopenia can broadly be described as either being pathogenic (related to infection), cytotoxic (toxic to cells), congenital (caused by genetic defect), or nutritional.

An overall low white blood cell count (leukopenia) is most often detected when your healthcare provider orders a test for a condition you're already experiencing. A low count is rarely an unexpected finding.

In some cases, the type of white blood cell affected may be enough to point you in the direction of a diagnosis. At other times, you may need additional tests to piece together a cause.

If your white blood cell count is very low, you may need to take special precautions to prevent illness. This includes avoiding others who may be ill, washing your hands regularly and thoroughly, or even wearing a face mask if you are in a confined space (such as an airplane) with others.﻿﻿﻿ 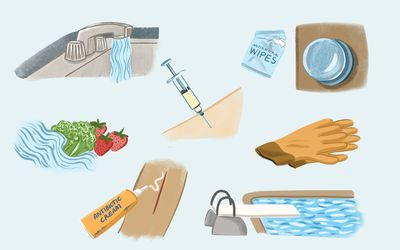