Collagenous Colitis and Lymphocytic Colitis Are Not Related to IBD

Microscopic colitis is an umbrella term that covers two similar but separate conditions: collagenous colitis and lymphocytic colitis. Although they have “colitis” in their name, these conditions are not related to ulcerative colitis or Crohn’s disease (collectively known as inflammatory bowel disease, or IBD). "Colitis" refers to inflammation in the large intestine, which is a sign of microscopic colitis.

The group most often diagnosed with collagenous colitis are people in their 50s. The condition tends to affect more women than men. The average age of onset for lymphocytic colitis is for people in their 60s, and women seem to be affected slightly more often than men in this case, as well.

Microscopic colitis has not been extensively researched, so it's still unknown as to how common it might be. While the symptoms can be distressing, this condition is very treatable, and sometimes it clears up on its own.

The cause of microscopic colitis is currently unknown; it is an idiopathic disease. One theory is that the use of nonsteroidal-anti-inflammatory drugs (NSAIDs, such as ibuprofen) or proton pump inhibitors (PPIs, such as Lansoprazole), statins, and selective serotonin reuptake inhibitors (SSRIs, such as Zoloft) may contribute to the development of microscopic colitis. Another theory is that microscopic colitis is caused by an autoimmune response, where the body’s immune system attacks other tissues in the body. Finally, smoking is considered another important factor in the development of this condition.

It is also thought that bacteria or viruses may play a role in the development of microscopic colitis. ﻿﻿ As of now, the exact relationship and mechanism of this cause are unknown.

The hallmark symptoms of microscopic colitis are chronic, watery diarrhea, sometimes accompanied by cramps and abdominal pain.﻿﻿ Diarrhea could range from being continuous and severe to intermittent in nature. Blood in the stool, which is a common sign of ulcerative colitis and sometimes of Crohn's disease, is not a sign of microscopic colitis. Blood in the stool is a reason to seek medical attention right away.

Other symptoms of microscopic colitis could include fever, joint pain, and fatigue. ﻿﻿ These symptoms may be a result of the inflammatory process that is part of an autoimmune or immune-mediated disease.

In microscopic colitis, the inside of the colon generally appears normal on sight. Therefore, no evidence of disease might be found during a colonoscopy or a sigmoidoscopy. In some patients, there may be areas of swelling or redness in the colon, but these may be difficult to see.

In order to make a diagnosis, several biopsies must be taken from the colon during a colonoscopy. These biopsies will preferably come from different areas in the colon. The hallmark signs of the disease can then be seen microscopically on biopsy tissue, hence the name of “microscopic” colitis.

In lymphocytic colitis, the examination of a biopsy will show increased numbers of lymphocytes in the colon tissue. The absence of collagen in the biopsy tissue is another indication that the diagnosis is lymphocytic colitis and not collagenous colitis.﻿﻿

Some cases of microscopic colitis may resolve on their own, without any specific treatment. The first line of defense for all patients is avoiding NSAIDs or weaning off other culprit medications, and ceasing smoking, if applicable.

For those cases that do require medical intervention, treatment may be initially started with the addition of fiber supplements in the diet. Fiber supplements include psyllium, methylcellulose, or polycarbophil, which can be bought over-the-counter in drugstores. Because the main symptom of microscopic colitis is chronic diarrhea, treatment may also include an anti-diarrheal medication such as loperamide or diphenoxylate.

For more severe cases of microscopic colitis, antibiotics or anti-inflammatory drugs may also be prescribed.

Corticosteroids such as prednisone should be discontinued as soon as symptoms are under control. For conditions of refractory (highly resistant) microscopic colitis, physicians may consider using biologic agents such as anti-tumor necrosis factors (TNF) therapy and immuno-modulators.

What Is Ulcerative Colitis?
Why Clinical Remission Is Not the Goal in IBD 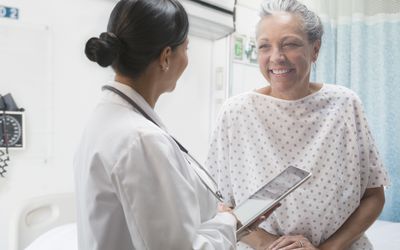