Ventilation-perfusion (V/Q) mismatch occurs when either the ventilation (airflow) or perfusion (blood flow) in the lungs is impaired, preventing the lungs from optimally delivering oxygen to the blood. This can cause shortness of breath, lightheadedness, or loss of consciousness, and occur due to chronic lung diseases (e.g., bronchitis) or a sudden lung impairment (e.g., pulmonary embolus).

V/Q mismatch develops as a chronic lung disease progresses. The effects of V/Q mismatch can vary depending on the severity of its cause and the discrepancy between blood circulation and airflow in the lungs.

You will also experience other symptoms of your lung disease, which can be compounded by the associated V/Q mismatch. Severe lung disease can cause profound symptoms even when V/Q mismatch is not a major issue.

For example, some, but not all, of the effects of chronic obstructive pulmonary disease (COPD) are related to V/Q mismatch. You can experience wheezing, dyspnea, and fatigue with COPD. As the disease progresses, V/Q mismatch tends to worsen too, adding to symptoms.

A lung infection like pneumonia causes fever, chest discomfort, and fatigue—whether you have V/Q mismatch or not. If the infection also causes V/Q mismatch, that can worsen fatigue.

Low oxygen concentration in the blood and tissues is problematic in the short term and in the long term, although it might not cause symptoms when oxygen levels are mildly low—especially if the process is gradual.

Lung diseases like COPD or asthma can impair airflow with little effect on pulmonary blood flow, resulting in low ventilation and nearly normal perfusion. This is described as a decreased V/Q ratio because the ventilation is more severely affected than the perfusion.

An actual object can block a bronchus, which prevents air from passing through a part of the lungs. This also results in a low V/Q ratio.

Conditions that may result in a decreased V/Q ratio include:

An increased V/Q ratio occurs when there is decreased perfusion in the lungs. Even with normal airflow or minimally impaired airflow, you could develop a V/Q mismatch in which the perfusion is low with nearly normal ventilation. This can occur due to disease or blockage of the blood vessels in the lungs.

The most common cause of a sudden increase in the V/Q ratio is a pulmonary embolism which can result from a deep vein thrombosis (DVT). This is a blood clot in the legs or arms that travels to the lungs.

It can obstruct blood flow in a pulmonary vein, decreasing perfusion to a region in the lung. Even as you inhale oxygen-rich air into your lungs, the lack of adequate blood flow means that the oxygen can’t get into your blood.

An increased V/Q ratio may also be seen with:

Some conditions, such as lung cancer, may cause damage to the airways and/or the pulmonary blood vessels—resulting in a decreased or an increased V/Q ratio, depending on the exact location of the damage in the lungs.

A pulmonary ventilation/perfusion (V/Q) scan is a type of X-ray used to measure your V/Q ratio. It can effectively identify a V/Q mismatch. The test involves two simultaneous parts.﻿﻿

This is completely safe. Your airflow and the blood flow will be visualized and measured because the radioactive substance will show up in your lung capillaries and lung airways on the image.

Your V/Q ratio is the amount of air that reaches the alveoli divided by the amount of blood that flows through the capillaries in the lungs.﻿﻿

With longstanding lung disease, the alveoli and capillaries can widen or narrow in response to changes in airflow and blood flow. This is your body’s way of compensating, and these adjustments can correct a V/Q mismatch even while your lungs remain damaged.

In other words, you might have an improvement of V/Q mismatch even as your lung disease advances, but this doesn’t mean that you can stop your treatment. Your symptoms and the results of other diagnostic tests can put this all in perspective to help your healthcare provider advise next steps.

There is a high likelihood that you will also have other tests along with your V/Q scan to help identify the cause of your lung disease and your V/Q mismatch.

These other tests may include:

Since V/Q mismatch is an effect of lung disease, the treatment is focused on managing the underlying condition itself.

Whether your V/Q mismatch is caused by pulmonary embolism, COPD, asthma, pneumonia, or another condition, the main goal is to increase blood flow or oxygen flow in the lungs to reduce or prevent hypoxia and hypoxemia.

Treatments may include medication, oxygen supplementation, and/or surgical intervention. You will likely have your oxygen levels monitored, especially if you are being treated for an urgent condition such as pulmonary embolus and pulmonary edema.

The placement of a filter in a vein (often in the arm) may be used as a strategy to prevent recurrent pulmonary embolus.

An infection may require treatment with antibiotics. Sometimes supplemental oxygen therapy can be helpful until the infection resolves.

Both asthma and COPD are treated with medications such as corticosteroid inhalers and bronchodilators. Supplemental oxygen might be necessary for advanced disease.

Pulmonary edema is treated with diuretics as well as supplemental oxygen.

Heart disease, pulmonary hypertension, and liver disease all are treated with a combination of medications and, in some cases, other treatments tailored to the condition.

Your V/Q ratio may improve as your condition improves. Typically, your symptoms and the results of complementary tests should improve with treatment as well.

Often, V/Q mismatch is a sign of lung disease. A measure of your V/Q ratio is part of the diagnostic testing that is done for the evaluation of certain lung diseases, especially when there is a high suspicion of a pulmonary embolism. Your V/Q scan results are used along with the results of your other tests to help guide treatment. 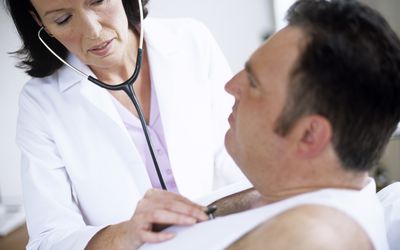