"Immunocompromised" means the body's immune system is weakened. You may also hear the term "immune deficiency," which has the same meaning. This is sometimes confused with "immunocompetent," which is a word used to describe an immune system that is functioning correctly.

The immune system is how the body fights off diseases and protects itself against new infections. Therefore, someone who is immunocompromised will usually get sick more often, stay sick longer, and be more vulnerable to different types of infections.

People who are immunocompromised are also at higher risk for severe disease or death from viruses like COVID-19 and influenza. They may also be less likely to respond well to vaccination.

Your immune system is responsible for protecting your body against infections. Several organs are part of your immune system, including your spleen, tonsils, bone marrow, and lymph nodes. Together, these organs work together to create immune cells, otherwise known as white blood cells, and antibodies.

Parts of the Immune System

There are two complementary systems in the immune system:

Innate immunity is immunity people are born with. It does not respond to specific pathogens as much as it responds to specific types of threats.

When a person is immunocompromised, they are more susceptible to infections. The major sign of immunodeficiency is getting repeated or serious infections that are rare or that only cause minor problems in the general population.

For example, people who are immunocompromised often get more serious and more frequent yeast infections. People living with AIDS are more likely to be diagnosed with rare cancers, such as Kaposi's sarcoma.

There are also degrees of immune deficiency. Some people simply take longer to fight off common infections, whereas others must be protected from any disease exposures because even a normally mild condition could put their life at risk.

In contrast, secondary immunodeficiency is caused by exposure to something else. This can be a disease, like HIV. It can also be an accident or operation, such as one that damages the spleen.

There are many conditions and situations that can lead to a person becoming immunocompromised.

Part of the definition of AIDS is that people living with the condition are immunocompromised. Immune deficiency is one of the signs that separates a person living with AIDS from someone who acquired HIV.

People diagnosed with AIDS are susceptible to opportunistic infections that people with healthy immune systems would generally be capable of fighting off.

This is because a specific type of immune system cells, CD4 cells, are reduced in number when the virus is active. When a person diagnosed with HIV has a CD4 cell count that is below 200 cells per millimeter they are defined as having AIDS.

The agents used to attack cancer cells also affect any actively dividing cells, including those in the bone marrow that produce the white blood cells that are a key part of the immune system. As a result, white blood cell counts often drop for people undergoing chemotherapy.

Certain cancers can cause a person to become immunocompromised even without chemotherapy. These include leukemia and lymphoma, in which cancerous white blood cells crowd out functioning white blood cells.

Autoimmune diseases include those in which the immune system attacks itself, such as myasthenia gravis and systemic lupus erythematosus.

Those that inhibit the immune system include corticosteroids, tumor necrosis factor inhibitors, and anticonvulsants.

Some rare disorders present at birth affect the immune system and can result in immunodeficiency.

As you age, you produce fewer T-cells, macrophages, and complement proteins, which are all key parts of the immune system.

Your healthcare providers will probably want to do several tests if they are worried you might have an immune deficiency. In addition, they will probably ask for a detailed medical history to determine if you've had repeated infections, which can be a hallmark of an immune disorder.

The blood tests will likely include a white blood cell count, a T-cell count, and a check of your antibody (immunoglobulin) levels. Your healthcare provider may also attempt to vaccinate you to see if the vaccine causes your body to produce protective antibodies. If it does not, that may be because of an immune deficiency.

Depending on the reason a person is immunocompromised, the deficiencies in their immune system may be temporary or permanent. In many cases, it is possible for a person's immune system to return to nearly full function.

For example, successfully treating HIV can restore the immune system. However, with a primary immunodeficiency, treatment options may be more limited.

When the immunodeficiency itself isn't treatable, there are still other options. For example, there are therapies available that can help individuals fight off certain infections. You may also be more likely to need antibiotics or antiviral medications to fight diseases that immunocompetent people can ward off without treatment.﻿﻿

It's important to be aware that there may be people around you who are immunocompromised, even though it can be difficult or impossible to identify them. One of the ways you can help protect immunocompromised people is by following local health advisories. For example, wear a mask and practice social distancing if there is a high rate of COVID-19 spread in your area.

You can also take other steps to help protect immunocompromised people, such as washing your hands frequently, covering your sneezes or coughs with your elbow, and staying home when you're sick. Keeping your vaccinations up to date is another way you can avoid spreading illness to people who are immunocompromised.

One of the questions many people have about HIV infection is whether it always leads to someone being immunocompromised. The answer is no. With early and effective treatment, people living with HIV can live long, healthy lives and show no clinical signs of an immune deficiency.

HIV/AIDS
7 Sources
Verywell Health uses only high-quality sources, including peer-reviewed studies, to support the facts within our articles. Read our editorial process to learn more about how we fact-check and keep our content accurate, reliable, and trustworthy.
Additional Reading 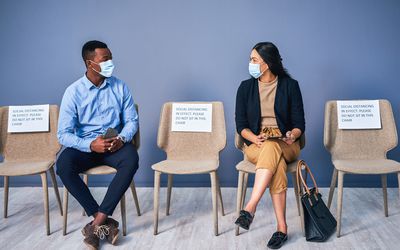