One of the biggest concerns among people with lung cancer is that the cancer may spread to other parts of the body. This is known as metastasis (plural metastases) and occurs in around 40% of newly diagnosed people.

When lung cancer is diagnosed, doctors will perform tests to see if metastasis has occurred. Although this can occur in any part of the body, there are several sites where it is more common.


The article details the five sites where lung cancer most commonly spreads as well as the symptoms it can cause in each location and what can be done to treat it. It also offers insights into the prognosis (likely outcome) of metastatic lung cancer.

The most common areas for lung cancer to spread are:

Different stages of the disease indicate how much the cancer has grown and spread. Local spread is known as stage 2. Metastasis occurs when cancer spreads to distant sites. Unlike early-stage cancer that may be cured, metastatic cancer (also known as stage 4 cancer) cannot and is instead managed.

Most lung cancers first spread to lymph nodes within the lung or around the major airways. Lymph nodes are tiny organs clustered throughout the body that trap and filter foreign substances.

As long as cancer only spreads to nearby lymph nodes, it isn't considered metastatic. It is only when distant lymph nodes are affected that stage 4 cancer is diagnosed.

The local spread of cancer to the lymph nodes can occur during stage 2 NSCLC or limited-stage SCLC. People at this stage often have no symptoms.

If left untreated, the cancer can spread to distant lymph nodes and other sites in the body. It is at this stage (called stage 4 NSCLC or extensive-stage SCLC) that you may notice a hardened lump in the neck or armpit where a lymph node has cancer cells.

Surgery is the first-line treatment for early-stage NSCLC and includes the partial or complete removal of nearby lymph nodes. Other treatments such as radiation, chemotherapy, and targeted therapy may be used with surgery or on their own for people with metastatic disease.

One of the more serious complications of NSCLC is lung cancer metastases to bones. Roughly 30% to 40% of people with advanced lung cancer will develop this.

The areas most affected by bone metastases include:

Pain is the most common symptom. The pain often starts gradually, feeling more like a muscle pull or strain, before turning severe. With advanced cancer, the bone can weaken and lead to a pathologic fracture.

The slow breakup of bone can also increase calcium levels in the blood. This can lead to hypercalcemia, a condition that can cause confusion, muscle weakness, and a loss of appetite, among other things.

The primary goal of treatment is to reduce pain and prevent fractures. Options include pain medications, radiation, surgery, and drugs used to slow the breakdown of bone.

Bone metastases most often affect the spine, pelvis, thigh bone, upper arm bone, and bones of the hands or feet. Pain and bone fractures are common with advanced disease.

Lung cancer is the most common cancer that spreads to the brain. In fact, as many as 40% of people with lung cancer will develop brain metastases at some point. This can occur with both NSCLC and SCLC but is known to develop rapidly with SCLC.

Lung cancer that has spread to the brain can cause symptoms such as:

However, as many as 44% of people will have no symptoms at all.

The treatment is primarily palliative, meaning that the goal is to control symptoms rather than cure the disease. This may involve pain medications, anti-seizure drugs, radiation to shrink tumors, or steroids to decrease brain swelling.

Lung cancer is the most common cancer that spreads to the brain. While brain metastasis can cause seizures, vision loss, confusion, or weakness on one side of the body, only around four of every 10 people will have symptoms.

Lung cancer that has spread to the liver is common and can affect anywhere from 30% to 50% of people with advanced-stage disease.

Many people with liver metastases will have no symptoms, but those who do may experience:

Chemotherapy is usually recommended to treat both the primary tumor and cancer cells in the liver. This sometimes involves transarterial chemoembolization, a procedure in which a tube called a catheter delivers chemotherapy drugs directly to the liver.

In rare cases, if only a single tumor or a few tumors are found, they may be removed with surgery.

When Lung Cancer Spreads to the Liver

Adrenal glands are organs on the top of the kidneys that produce hormones. Lung cancer that spreads to the adrenal glands does not usually cause symptoms and is most often discovered during the routine staging of cancer.

Treatment with chemotherapy is useful in extending survival. In cases where the lung tumor can be resected (removed), the affected adrenal gland may be removed as well.

When Lung Cancer Spreads to the Adrenal Glands

Other than the spread of cancer to nearby lymph nodes, lung cancer that has metastasized generally has poor outcomes.

This doesn't mean your chances of survival are necessarily low, however. NCI statistics are based on all people with stage 4 lung cancer, some of whom may be older, less healthy, or have different types of cancer than you. Other issues factor into your individual odds of survival, not least of which is your performance status (a measurement of your ability to perform everyday tasks).

There are also drugs today called checkpoint inhibitors, which include Keytruda (pembrolizumab) and Opdivo (nivolumab), that have greatly improved survival times in people with metastatic lung cancer.

Although the prognosis of metastatic lung cancer is generally poor, your chances of survival may be greater based on your age, cancer type, and general health. Newer drugs like Keytruda and Opdivo are also increasing survival times.

The five parts of the body where lung cancer commonly spreads are the lymph nodes, bones, brain, liver, and adrenal glands. The spread may be limited to nearby lymph nodes, where the cancer is more readily treated. If it spreads to distant organs, it is referred to as metastatic lung cancer and is considered incurable.

Even so, there are drugs and treatments that can manage metastatic lung cancer and control symptoms. Although the prognosis of stage 4 lung cancer is generally poor, some people live for many years due to advances in treatment.

Newer treatments, such as immunotherapy drugs, offer hope that long-term lung cancer survival may be possible for some people. While these drugs do not work for everyone, some people with advanced lung cancer have had excellent results.

Be sure that you speak to your healthcare provider about all of your options if you are diagnosed with metastatic lung cancer. There are also clinical trials that offer the latest approaches to treatment. 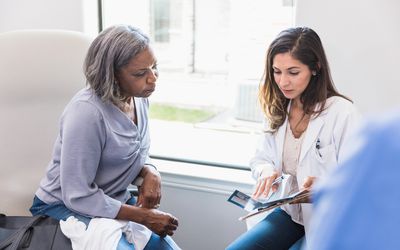 What Is Metastatic Lung Cancer?