In addition to these tests, others will be performed to ensure that your body is functioning normally and there are no signs of illness or drug toxicity. Central to this is a panel of tests called the complete blood count (CBC).

The CBC measures the composition of cells in a sample of blood to flag for changes that fall outside of the "normal" range of values. This can help alert doctors if a drug like Retrovir (zidovudine) is causing anemia or there are early signs of an opportunistic infection. The CBC is often the first clue that something is not right.

This article looks at the three major blood cell types in a CBC and what high or low counts of each can mean if you are living with HIV.

How Often Should You Get Your CD4 Count and Viral Load Tested?

A white blood cell count (WBC) is one of the tests included in the CBC. It measures the total number of leukocytes in a blood sample and also the counts of the different types of white blood cells, namely:

An elevated WBC typically means that your body is fighting an infection. Other tests can then be performed to pinpoint the cause.

Increased numbers of certain white blood cells may indicate a specific type of infection or an allergic inflammatory response. For example, higher-than-normal eosinophils may suggest a parasitic infection like toxoplasmosis, while elevated basophils can develop in people with a reaction to a medication.

By contrast, a low WBC suggests that some condition is affecting the bone marrow's ability to produce white blood cells. When this occurs, the body is less able to fight infection.

A decrease in white blood cells may be the result of HIV medications (like ganciclovir) that suppress the bone marrow, HIV-associated diseases that affect blood cells (like lymphoma), or a major opportunistic infection like tuberculosis.

Red blood cells (erythrocytes) are responsible for carrying oxygen from the lungs to cells and tissues of the body. A red blood cell count (RBC) is performed as part of the CBC to measure the total number of erythrocytes in a sample of blood along with other key values, such as:

A low RBC is a sign of anemia, a condition in which you lack enough healthy red blood cells to carry adequate oxygen to your body's tissues.

In HIV, anemia is a common side effect of Retrovir, a drug that can suppress bone marrow. Anemia can also be due to an opportunistic infection, like cytomegalovirus (CMV) or Kaposi sarcoma (KS), that can target the digestive tract and cause bleeding.

A low red blood cell count is a sign of anemia, which may be due to drugs like Retrovir that suppress bone marrow or opportunistic infections that cause bleeding in the digestive tract. A high red blood count is uncommon but can happen with testosterone replacement therapy.

Platelets (thrombocytes) are colorless blood cells involved in blood clotting. Platelet counts are rarely so high as to cause health problems.

By contrast, low platelet counts (thrombocytopenia) can lead to easy bleeding or bruising. Severe cases can even result in potentially life-threatening internal bleeding.

Thrombocytopenia is associated with chronic HIV infection, primarily in people with advanced disease who are not yet on treatment. With that said, in anywhere from 5% to 15% of cases, thrombocytopenia is the first sign of the virus.

Starting antiretroviral therapy can generally resolve the condition by suppressing the inflammation that contributes to low platelet counts.

A complete blood count (CBC) is a panel of tests routinely performed in people living with HIV that measures the composition of white blood cells, red blood cells, and platelets in a sample of blood. Changes above or below the "normal" range of values may be an early sign of an infection or drug toxicity.

Based on the results of a CBC, a doctor can investigate the possible causes of high or low blood cell counts, often before a condition turns serious.

Download PDF
9 Sources
Verywell Health uses only high-quality sources, including peer-reviewed studies, to support the facts within our articles. Read our editorial process to learn more about how we fact-check and keep our content accurate, reliable, and trustworthy. 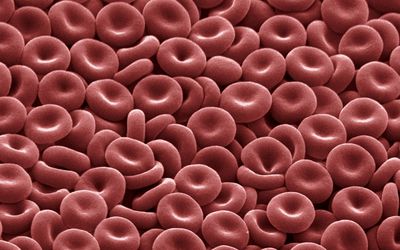