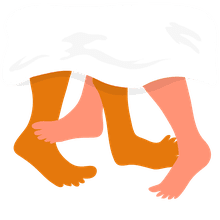 Xiaflex (collagenase clostridium histolyticum) is a prescription injection used to treat Dupuytren's contracture and Peyronie's disease. Approved in 2010, it is made up of several types of collagenase that come from bacteria. Collagenase is an enzyme that digests, or breaks down, collagen proteins. Symptoms of both Dupuytren's contracture and Peyronie's disease include abnormal collagen growth in affected areas.

Xiaflex is approved by the U.S. Food and Drug Administration (FDA) for treatment of adults with Dupuytren's contracture and for adult men with Peyronie's diseases with a palpable plaque and curvature deformity. It does not have any off-label uses.

Indications for Xiaflex depend on what condition you are being treated for.

Xiaflex is the only FDA-approved, non-surgical treatment for Peyronie's disease.

This drug, which is injected into penile plaques, is approved for the treatment of men with stable penile curvature. This means that men with active Peyronie's disease are not generally considered to be appropriate for Xiaflex treatment.

Before treatment is prescribed, men should have had Peyronie's disease for at least 12 months, and their penile curvature should have stopped changing.

Treatment with Xiaflex in patients with acute-phase disease is considered to be off-label.

In addition, treatment with Xiaflex has not been shown to be as effective for men with the following types of Peyronie's symptoms:

As with Peyronie's disease, Xiaflex is the only FDA-approved, non-surgical option for treating Dupuytren's contracture. It is indicated for use only in individuals over 18 years of age.

In order for this treatment to be used, patients must have some flexion contracture. This is because the finger must be extended after treatment to disrupt the contracted cord.

Patients whose Peyronie's disease involve the urethra should not use Xiaflex.

Xiaflex is contraindicated in people who:

The impact of Xiaflex on pregnancy and newborns has not been studied.

All listed dosages are according to the drug manufacturer. Check your prescription and talk to your doctor to make sure you are taking the right dose for you.

Xiaflex is injected into the affected tissue by a physician.

According to the manufacturer, treatment for Dupuytren's contracture involves injecting 0.58 milligrams (mg) of Xiaflex into each palpable, contracted cord. Up to two joints in the same hand can be treated during a single visit, however, any more should be treated at separate visits. Higher numbers of cords requiring treatment can be an indication for surgery.

Approximately 24 to 72 hours after injection, a finger extension procedure is performed. This extension can help break down the injected cords.

The process of injection and finger extension can be repeated up to three times for each cord. This should be done at approximately four-week intervals, as needed.

According to the manufacturer, treatment for Peyronie's disease involves injecting 0.58 mg of Xiaflex into an identified plaque. In order to identify the plaque to be treated, an erection is first induced (either naturally or by injection.) The plaque is then marked.

Once the penis is again flaccid, and only when the penis is flaccid, the Xiaflex is injected. This injection is then repeated a second time⁠—one to three days after the first injection.

Approximately one to three days after the second injection, the doctor will perform a penile modeling procedure. This involves stretching and reshaping the penis to try and increase length and reduce curvature. The doctor will also teach you how to gently stretch and straighten your penis.

The manufacturer recommends stretching the flaccid penis three times a day, and straightening the penis up to once a day, for the six weeks after each treatment cycle. However, the penis should only be straightened if you have a spontaneous erection.

Treatment can be repeated up to four times for each plaque. Re-treatment is recommended by the manufacturer to occur at approximately six-week intervals. Treatment should stop if curvature decreases to less than 15 degrees or it is otherwise not clinically indicated.

Again, side effects will differ depending on which condition you're being treated for.

Common Side Effects of Treatment for Dupuytren's Contracture

A quarter or more of patients being injected with Xiaflex for Dupuytren's contracture will experience one or more of the following side effects:

Severe Side Effects of Treatment for Dupuytren's Contracture

In rare cases, Dupuytren's contracture treatment with Xiaflex can lead to rupture of the flexor tendon. If the drug is injected incorrectly into tendons or ligaments, they can be temporarily or permanently damaged. Therefore proper training and injection technique is critical to safety.

Other severe reactions reported include:

The risk of skin tears is highest in patients treated with multiple injections at the same time.

Any symptoms suggesting serious injury should be reported to your doctor right away, as they may require surgical treatment.

Common Side Effects of Treatment for Peyronie's Disease

Side effects affecting more than one in four patients with Peyronie's disease include:

Severe Side Effects of Treatment for Peyronie's Disease

Serious side effects have occurred in people being injected with Xiaflex for Peyronie's treatment. These include:

These side effects may require surgical treatment. Therefore any symptoms that might reflect a serious penile injury should be reported to your doctor immediately.

Concerns about Xiaflex treatment effects are significant enough that doctors can only use it to treat Peyronie's disease if they are certified by the medication's REMS program. REMS stands for "risk evaluation and mitigation strategies."

In order to join the REMS program for Peyronie's treatment, doctors must undergo training in Xiaflex administration. Healthcare sites where the drug is available must also be certified and agree to make certain that the medication is only used by certified prescribers.

The manufacturer warns about the risk of serious injury after injection, as described above. Penile fracture, and potential penile fracture, are a high enough risk that the drug has a boxed warning for treatment of Peyronie's disease.

There is also a significant risk of bleeding in patients who have a history of bleeding problems and are treated with Xiaflex. The manufacturer recommends caution in using Xiaflex with any patient who has a diagnosed clotting problem or who is taking anti-coagulation therapy. In general, treatment with Xiaflex is not recommended for patients taking anticoagulants. The sole exception to this is individuals receiving low dose aspirin (up to 150 mg/day).