What Is Hay Fever?

Daniel More, MD, is a board-certified allergist and clinical immunologist. He is an assistant clinical professor at the University of California, San Francisco School of Medicine and currently practices at Central Coast Allergy and Asthma in Salinas, California.

Corinne Savides Happel, MD, is board-certified in allergies/immunology, with a focus on allergic skin disorders. She is a part-time assistant professor at Johns Hopkins School of Medicine.

Hay fever, which is also called allergic rhinitis, affects up to 30% of the population, as of 2011. It can begin at any age and affects children and adults. The symptoms, which include a stuffy, runny nose, and itchy eyes, may be triggered by a number of different factors, including plants, pollen, dust, pets, and mites.

Sometimes, it takes a while to identify the cause of your symptoms. If you're able to avoid the trigger, you might not need treatment. Often, however, it's impossible to entirely steer clear of certain triggers, like pollen, but medication can keep symptoms under control.

Symptoms of hay fever can include any of the following:﻿﻿

Do You Have a Rash?

Skin rashes, such as hives, allergic contact dermatitis, and eczema can occur from touching the same things that trigger your hay fever (like a plant or a pet).

If you have hay fever, you can be prone to other types of allergies and respiratory problems. For example, you may have food allergies.﻿﻿ Often, people who have hay fever also have a predisposition to developing a skin rash when the hay fever is not acting up, typically from triggers that don't induce the hay fever.

The Link Between Hay Fever and Asthma

Allergic rhinitis may cause other health issues. Uncontrolled hay fever symptoms can lead to sinus infections, ear infections, and worsening of asthma. It can also lead to nasal polyps. And people with allergic rhinitis are more prone to infections since the inflammation in the nose makes it difficult to trap and fight infectious microorganisms.

Allergic rhinitis can lead to missed workdays, school days, and reduced productivity. For some people, the effect of allergic rhinitis on quality of life is comparable to that of asthma or another chronic illness.

Allergic rhinitis is caused by inflammation and irritation of the nasal passages.﻿﻿ It's triggered by exposure to an otherwise harmless substance. After exposure, the body mounts a reaction that is similar to the reaction it has when fighting an infection.

The name hay fever is a bit misleading because hay is not the only trigger. Pollen, dust, mites, mold, plants, weeds, pets, and toxins such as cigarette smoke, paint fumes, and chemical fumes can cause hay fever.﻿﻿

For some people, food, fabrics, cosmetics, or perfumes can trigger an attack as well.

Hay fever is very common. There is a hereditary component to the condition, and many people with hay fever have relatives with allergies.﻿﻿

You're at a higher risk of allergic rhinitis if you have atopy or atopic dermatitis (eczema), or if you have a family history of either of these conditions. Atopy is a type of allergy characterized by an immunologic reaction called an IgE reaction.

Children of mothers who smoked during pregnancy are at a higher risk of developing the condition, as are people who live in a modernized lifestyle (i.e., urban setting, higher socioeconomic status, small family size). This is believed to be the result of the way the immune system develops when exposed to environmental factors at a young age.﻿﻿

The diagnosis of hay fever relies on your symptoms and your physical examination. Sometimes, diagnostic testing can help identify hay fever triggers or complications.

It's often difficult to tell the difference between a common cold and hay fever, and many people often confuse one for the other when experiencing symptoms.

There are some clues that suggest that you may have allergic rhinitis:

During your evaluation for hay fever, your healthcare provider will look in your mouth, nose, and ears. Your mouth may show signs of postnasal drip. The mucous membranes in your nose can appear pale and swollen if you have hay fever. Allergies can cause fluid to accumulate behind the eardrum.

Dark circles under the eyes (“allergic shiners”) can develop due to nasal congestion. And you can develop a horizontal crease on your nasal bridge from the upward rubbing of the nose with the palm of the hand; this is often called the “allergic salute.”

Allergy testing includes skin testing or blood tests (called a RAST). Skin testing is performed in a variety of ways, the most common being prick (or scratch) tests.

What Is a RAST Test?

In general, imaging tests are not a major part of a hay fever evaluation. If your healthcare provider is concerned that your symptoms are caused by an infection or another illness (such as respiratory disease, lupus, or a tumor), then you may need an imaging evaluation, such as an X-ray or a computerized tomography (CT) scan. Nasal endoscopy is used to rule out nasal polyps.

There are a number of effective ways to manage hay fever. If you know what your trigger is, and if it's avoidable, reducing your exposure to your trigger (or triggers) can help prevent attacks.

Depending on the frequency, severity, and predictability of your symptoms, you may need to take preventative medication on a regular basis. And sometimes, treatments such as eye drops can ease discomfort as well.

Some people benefit from immunotherapy, better known as allergy shots. These are injections of the allergen (the substance that induces your hay fever episodes) to diminish your immune response. Allergy shots often take months to work and need to be repeated, but the therapeutic effects can last for months.﻿﻿

If nasal obstruction or nasal polyps are evident, sinus surgery may be necessary.

Adults are often surprised to develop the condition during their 40s and 50s because it is thought of as a condition that begins in childhood or adolescence. Interestingly, hay fever and other allergies can resolve or develop throughout life, so you can experience changes in your symptoms and new triggers as you get older.

10 Sources
Verywell Health uses only high-quality sources, including peer-reviewed studies, to support the facts within our articles. Read our editorial process to learn more about how we fact-check and keep our content accurate, reliable, and trustworthy.

By Daniel More, MD
Daniel More, MD, is a board-certified allergist and clinical immunologist. He is an assistant clinical professor at the University of California, San Francisco School of Medicine and currently practices at Central Coast Allergy and Asthma in Salinas, California.

An Overview of Hay Fever Rash

An Overview of Allergy Coughs

All About Ragweed Allergy

Nasal Pruritis: What Does It Mean When Your Nose Itches? 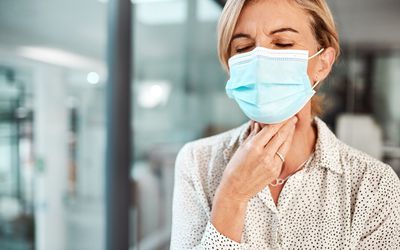 Can Allergies Cause a Dry Throat?

The Connection Between Nasal Polyps and Sinus Infections

Causes and Symptoms of Chronic Rhinitis

What's the Difference Between Allergies and Colds?

14 Reasons You Have a Runny Nose