The Anatomy of the Uterus

A Muscular Organ in the Pelvis That Is Essential for Reproduction

The uterus, also known as the womb, is a hollow, muscular organ located in the pelvis between the bladder and rectum of individuals who are assigned female at birth. This pear-shaped organ plays a role in menstruation, pregnancy, and childbirth.

The lining of the uterus (endometrium) is the source of the blood and tissue shed each month during menstruation. After an egg released from an ovary has been fertilized, the resulting embryo implants in the uterus and fetal development begins.

The uterus stretches exponentially to accommodate a growing fetus and contracts to push a baby out during childbirth.

Shaped like an inverted pear, the uterus sits behind the bladder and in front of the rectum. There are four main parts of the uterus:

The uterus is supported in the pelvis by the diaphragm, the perineal body, and a collection of ligaments, including the round ligaments.

The cervix dilates, or widens, to allow childbirth.

What Is Dilation in Pregnancy?

There are four main functions of the uterus. The uterus plays a significant role in the processes of:

What Women Should Know About Their Ovaries

During a typical menstrual cycle, the endometrial lining of the uterus goes through a process called vascularization. During this time, tiny blood vessels proliferate, or leave the lining thicker and rich with blood, in the event that the egg is released and fertilized during that cycle. If this does not happen, the uterus sheds the lining as a menstrual period.

All About the Endometrial Lining

If conception occurs, the fertilized egg (the embryo) burrows into the endometrium from which the pregnant individual's portion of the placenta, the decidua basalis, will develop.

As a pregnancy progresses, the uterus grows and the muscular walls become thinner, like a balloon being blown up.

This helps accommodate the developing fetus and the protective amniotic fluid. Amniotic fluid is produced first by the pregnant individual and later by urine and lung secretions of the baby.

Position of Uterus in Pregnancy

During pregnancy, the muscular layer of the uterus begins contracting on-and-off in preparation for childbirth. These "practice" contractions, or Braxton-Hicks contractions, resemble menstrual cramps; some individuals don't even notice them.

Unlike Braxton-Hicks contractions, labor contractions are increasingly powerful and are strong enough to squeeze the baby out of the uterus and into the vagina.

How to Know if You're in Labor

The uterus can be subject to any number of health issues. The most common uterus problems and conditions include:

An estimated 11% of assigned females are affected by endometriosis, a condition in which the tissue of the endometrial lining grows outside of the uterus. This can cause symptoms that include:

Less common symptoms of endometriosis include spotting between periods, digestive problems, and infertility.

Endometriosis may be treated with extended-cycle hormonal birth control or an intrauterine device (IUD). However, some individuals respond to complementary and alternative therapies such as acupuncture, chiropractic care, or supplements. The condition often goes away after menopause.

How Endometriosis Is Treated

Uterine fibroids are noncancerous tumors that grow in the muscular tissue of the uterus. Fibroids often do not cause symptoms or require treatment.

For some individuals, however, uterine fibroids lead to heavy periods or pain. These symptoms are typically treated with over-the-counter pain relievers containing ibuprofen or acetaminophen, or hormonal contraception.

In severe cases, surgery such as endometrial ablation, myomectomy, or uterine fibroid embolization may be required.

Polyps are fingerlike growths that attach to the wall of the uterus. They can range in size from as small as a sesame seed to larger than a golf ball. Many individuals have polyps without knowing it. When symptoms do occur, they can include:

Uterine polyps carry a small risk of cancer and should be removed with a procedure known as hysteroscopy. Sometimes a dilation and curettage (D and C) is done to remove and biopsy endometrial polyps.

The Symptoms of Uterine Polyps

Some individuals have a retroverted or retroflexed uterus, which means it is in a tipped or tilted position. This anatomical variation usually isn't detected unless an individual becomes pregnant, and usually it is not an issue.

However, some individuals with a tilted uterus may have a higher risk of miscarriage or experience a pregnancy complication known as uterine incarceration. If that happens, a Caesarean delivery will be necessary.

Tilted Uterus and the Risk of Miscarriage

There are two types of cancers that can affect the uterus:

What Is Endometrial Cancer?

Tests involving the uterus are used to screen for cancer, diagnose certain diseases and conditions, aid in fertility treatments, and monitor the progress of a pregancy. They include:

The uterus is a hollow, pear-shaped organ located behind the bladder and in front of the rectum. The uterus is made up of three main tissues and has four distinct parts.

The uterus plays a significant role in menstruation, implantation, gestation, and labor. While the uterus is subject to certain health concerns, there are diagnostic tests and treatment options available.

14 Sources
Verywell Health uses only high-quality sources, including peer-reviewed studies, to support the facts within our articles. Read our editorial process to learn more about how we fact-check and keep our content accurate, reliable, and trustworthy.

Endometriosis After Pregnancy: Recurrence and Coping

The Endometrium and Its Role in Reproductive Health 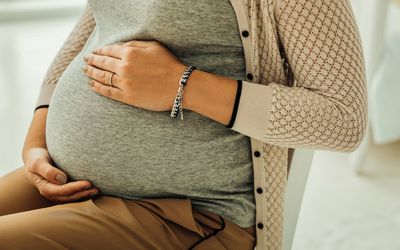 How Do Braxton-Hicks vs. Contractions Feel?

IUI vs. IVF: Deciding Which Is Right for You

Signs and Symptoms of an Enlarged Uterus

Hysterectomy in the United States