What Genes Can Tell Us About Heart Disease

The Cleveland Clinic is the #2 rated hospital in the U.S., according to U.S. News and World Report.

There is tremendous interest in learning what our genes can tell us about ourselves. Wouldn’t you like to know if you have an irregular gene (“gene variant”) that causes sky-high cholesterol or makes your blood clot easier before it could be detected with a standard blood test? Wouldn’t it be helpful to know if you are at risk for a future heart attack at a young age, so you could start treatment to prevent it?

There is a great deal of excitement over the promise of genomic sequencing and how it might be used to create more effective treatments for an individual—in essence, to personalize care. Already, cancer doctors are beginning to use genetic information from a person’s tumors to choose what they believe to be the most effective drugs. But personalized medicine is still in its infancy and not widely used in cardiology yet. Why? Because the more we learn, the more questions we have.

Learning What Genes Have to Say

Our DNA is incredibly complex. Every one of us has three million base pairs of genes. To know which gene pairs are abnormal, we first had to learn what normal genes look like. Fortunately, dedicated geneticists were able to map the DNA with the help of powerful computers. Sophisticated machines can read these complex codes very quickly—and the process that took 13 years to complete can now be done in a day or so.

Next, these scientists began looking for irregular genes that appeared in people with certain diseases, so they could make a connection between the mutation and the condition. This is like finding typos in the pages of a book—everyone has several typos in their DNA.

But we’ve learned the connection is not always straightforward. For example, we found several gene variants that lead to hypertrophic cardiomyopathy, a disease that causes the heart muscle to thicken, enlarge, and ultimately fail. For a long time we have known that not everyone who carries this gene variant develops the disease. This applies to other gene variants, as well.

Furthermore, scientists recently found out that a gene variant in hypertrophic cardiomyopathy may affect some races, but not others. For example, caucasian people who have a gene variant may develop a disease, while Black people with the same gene variant may not. We don’t know exactly why. So the presence of a gene variant in some people may have a different implication in others—which means other factors may be at play.

In addition, there are plenty of diseases that appear to have a genetic cause, because they run in families, but we haven’t been able to identify the gene variants that cause them. It is likely that multiple gene variants are involved.

From a heart standpoint, we have learned the most from rare mutations. These discoveries have led to a better understanding of how nature can correct these problems. There is a lot of hope that we can use this insight to develop new drugs to treat these diseases.

For example, a gene variant was identified a decade ago as being associated with the liver’s inability to clear cholesterol from the bloodstream. People with this mutation have very high blood cholesterol levels. This discovery was used to create a new class of cholesterol medications, called PCSK9 inhibitors, which help patients with the mutation metabolize cholesterol.

The medication stops a protein called PCSK9 from interfering with the normal cholesterol clearance mechanism in the liver. It took less than a decade from the discovery of the PCSK9 pathway to the production of a drug that could be used in patients. This would not have been possible without knowledge of the genetic code.

Genetic studies are bringing us closer to finding a treatment for hypertrophic cardiomyopathy, as well. An innovative treatment using small molecules to target where the gene variant is located has been developed. When cats that are prone to this disease are given this agent, the chance they will develop an enlarged heart drops.

The next step is to test the formula on humans at risk for the disease. If the treatment is effective, it will be a breakthrough in preventing hypertrophic cardiomyopathy. No treatment is currently available for those who have a higher likelihood of developing this disease because they carry the gene variant. Developments like these are very exciting as they change our approach to patient care from reactive to proactive.

What We Don’t Know

As we come closer to understanding the relationship between gene mutations and diseases, a third factor arises to complicate matters—how our genes interact with the environment and our daily life. Gathering this knowledge will take a systematic approach to clinical studies and many decades to arrive at answers.

Eventually, however, we hope they will help us understand some basic questions, such as why some people who either smoke, breathe polluted air, or eat poor diets develop heart disease while others don’t. The good news is that recent studies also suggest that healthy habits, like exercising regularly and eating a healthy diet, may overcome the risks of developing cardiovascular diseases that are “inherited” through gene variants.

Filling in the Blanks

There are a lot of missing pieces of the DNA puzzle. Fortunately, several huge efforts are underway to collect and analyze genomic data. The ultimate goal is to give doctors the knowledge they need to treat patients who present with a certain disease.

One effort is called the Precision Medicine Initiative, or “All of Us”. It is a unique project aimed at identifying individual differences in genes, environment, and lifestyle. The project will enroll one million or more participants nationwide who agree to share biological samples, genetic data, and diet and lifestyle information with researchers through their electronic medical records. It is hoped that the information gathered through this program will result in more precise treatments for many diseases.

The cost of DNA sequencing has dropped from thousands of dollars to hundreds of dollars—and continues to decrease. As the lower prices make DNA testing accessible for the average person, we are likely to see more direct-to-consumer marketing that will allow families to identify some genetic disease risks, similar to how you can already use DNA testing to discover your ancestry. We are still learning the implications of how obtaining information on disease risk may impact people’s health and wellbeing.

In the medical world, we are trying to figure out how to use DNA testing to obtain information that we can’t get through other types of testing. Once we acquire the information, we need to know what to do with it. A good example is familial hypercholesterolemia. DNA testing has revealed that three percent of people are at an increased risk for this condition that causes dangerously high blood cholesterol levels. So:

Questions like these need to be answered before we can use DNA testing to justify our treatment approach.

We have just begun to scratch the surface, but we anticipate that genetics will eventually change how cardiologists evaluate patients and their families with certain forms of heart disease, such as heart failure. One in every five adults develops heart failure. And the disease affects the children of one in every four heart failure patients. We’d like to identify these people before they develop heart failure.

Thankfully, many exciting new developments in knowledge and technology are enabling us to tackle this enormously complicated puzzle. Identifying the potential of gene testing is a daunting task, but an exciting one. Everyone is looking forward to seeing progress.

Dr. Tang is a cardiologist at Cleveland Clinic's Heart and Vascular Institute, the nation's No. 1 cardiology and heart surgery program as ranked by U.S. News & World Report. He is also Director of the Center for Clinical Genomics.

Sources
Verywell Health uses only high-quality sources, including peer-reviewed studies, to support the facts within our articles. Read our editorial process to learn more about how we fact-check and keep our content accurate, reliable, and trustworthy.
See Our Editorial Process
Meet Our Medical Expert Board
Share Feedback
Was this page helpful?
Thanks for your feedback!
What is your feedback?
Related Articles

Genetic Tests Can Identify Breast Cancer Risk. Why Is It So Hard to Interpret the Results?

What Are Genes, DNA, and Chromosomes?

What Is Hypertrophic Cardiomyopathy?

What Genomic Testing Can Tell You About Health Risks

Ask a Molecular Biologist: How Do You Make Sense of Emerging COVID-19 Variants?

How Are MTHFR Gene Mutations and Disease Risk Linked?

The History of Cancer: Discovery and Treatment 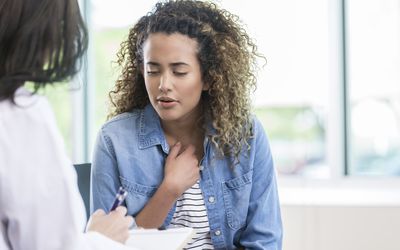 Omicron Variants BQ.1 and BQ.1.1 Are Now Dominant in U.S.

What Is a Liquid Biopsy?