A Look at Hematopoiesis

Karen Raymaakers
Karen Raymaakers RN, CON(C) is a certified oncology nurse that has worked with leukemia and lymphoma patients for over a decade.
Learn about our editorial process
Medically reviewed by Douglas A. Nelson, MD

Douglas A. Nelson, MD, is a board-certified oncologist and hematologist who previously served for 13 years as a physician in the US Air Force.

Hematopoiesis (pronounced heem-at-oh-po-EE-sus) is the process by which all of your blood cells are formed, develop and mature into their final adult types.

The term refers to the pathways or tracks of blood cell development, beginning with what’s known as a hematopoietic stem cell (HSC), going through a series of steps to arrive at the final product—a mature blood cell, whether it’s a red blood cell, a white blood cell such as a lymphocyte, or some other type of blood cell. Other terms for this process of blood cell formation include hematogenesis, hemogenesis, and hemopoiesis.

The sites of blood cell production depend on whether you are talking about a baby still in its mother’s womb, or afterward during infancy and throughout adulthood. That is, in utero, a developing child uses a variety of different sites in the body for hematopoiesis, including the liver, spleen, thymus, lymph nodes, as well as bone marrow. After birth, the main site of hematopoiesis is in the bone marrow.

You might come across the word hematopoiesis, or the adjective hematopoietic, in a number of different scenarios:

Circulating blood contains a mix of cells, cell products, and fluids. Our bodies produce blood cells continuously from the time we are in the womb up to old age. Millions of blood cells are replaced each day as they live out their lifespans. Different types of cells have different lifespans, and in healthy adults, red blood cells normally live about 100 to 120 days before they need to be replaced.

There are more than 10 different kinds of blood cells, each performing its own set of tasks. Though red and white blood cells may end up in different places in the body, production starts in the bone marrow.

In the Bone Marrow

Within the hollows of certain bones, the marrow tissue exists, including hematopoietic stem cells (also called pluripotent hematopoietic stem cells) that give rise to all of the different types of blood cells. Some of these stem cells remain "uncommitted" so that they can continue to reproduce cells of whatever type is needed, sort of like a queen bee laying eggs, but other stem cells start the process of committing, to become "progenitors" or "precursors" of distinctly different cell lines. Cell lines/lineages can be thought of as different branches of the blood cell family tree.

In the Blood, Fluids, and Tissues

Once grown and mature, red blood cells stay in the blood. White blood cells may also be found in the bloodstream, but they may be more prevalent at other sites. For instance, lymphocytes are far more common and numerous in the lymphatic system than in the blood.

From Bone Marrow to Bloodstream

If the HSC commits to producing mature blood cells, it will undergo several cell divisions before becoming that cell. Every time the cell divides, it takes on more of the characteristics of the adult cell it will become. In other words, it becomes more differentiated or specialized.

Stimulating the body to produce more new blood cells—a sort of artificial hematopoiesis–can be helpful in certain situations. For instance, sometimes the bone marrow is stimulated in advance of a planned cancer therapy when profound suppression of the blood-forming cells in the marrow is expected.

Like any cell, the HSCs can undergo a mutation that leads to dysfunctional or malignant cells being produced rather than healthy cells. Depending on what stage of differentiation the cell is in when it makes this transformation, it gives rise to different types of disorders: myeloproliferative disorders, leukemias, lymphomas, and myelomas.﻿﻿﻿

An abnormal younger cell type may be referred to as a ‘blast.’ Blasts in patients with leukemia can suggest the cancerous transformation occurred in a blood-forming cell that was at an earlier stage of development. If the predominant cells in leukemia or lymphoma are more mature types, this indicates the cancerous transformation happened to a more mature cell or a cell that was closer to the final adult stage.

The treatment of leukemia, lymphoma and other blood cancers may involve a transplant of hematopoietic stem cells. These can be your own cells, harvested from your bone marrow (autologous), or from a donor (allogeneic). Techniques used to obtain healthy blood-forming cells from the donor vary, but the transplant itself is a simple transfusion as the hematopoietic stem cells migrate from the blood into the bone marrow.

2 Sources
Verywell Health uses only high-quality sources, including peer-reviewed studies, to support the facts within our articles. Read our editorial process to learn more about how we fact-check and keep our content accurate, reliable, and trustworthy.

Major Differences Between Leukemia and Lymphoma

How Leukemia Is Treated

5 Things To Know About Lymphocytes

Monocyte Functions in the Body

White Blood Cell Disorders Facts and Statistics: What You Need to Know

How Lymphoma Is Treated 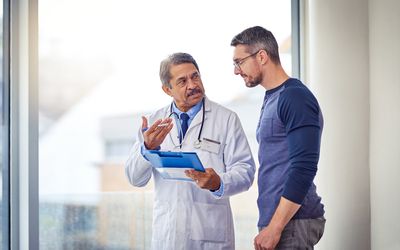 Understanding the Functions of the Thymus